The Spitfire only has four gauges - Speedometer, Tachometer, Fuel, and Temperature. The speedometer should work just fine as it is. The tachometer will need some work - I have a dual shaft motor, so I can pick up a tachometer sensor that will attach directly to my motor.

The last two are what I spent my weekend sprucing up... 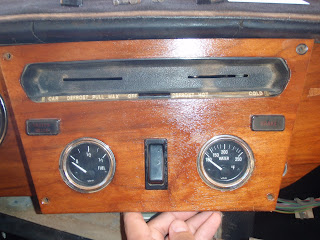 Since I pulled the radiator out of the car, the existing temperature gauge no longer had anything to read from. I decided to pull out the gauge and figure out how it worked. 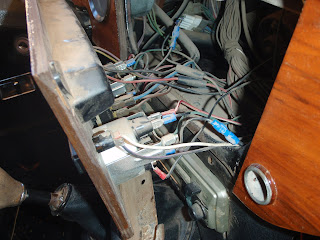 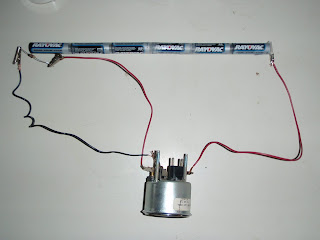 I want to use existing gauges as much as possible. Primarily to keep the classic style of the car but also to simplify the conversion as much as possible. The original sensor is long gone (probably in a Spitfire somewhere in California right now), but it turns out it wouldn't work anyways. The factory sensor has only a single wire input at the rear and its threading makes the ground connection.

Great for regular engines, very bad when your sensor is on a 12V line that probably shouldn't be grounded to a 120V motor. Some vehicles use 2 wire sensors that don't ground at the threads.

I searched around the Internet for a while, but I couldn't find a good way to read the motor's temperature. I decided to check out the local Checkers Auto Parts store. Okay, I am not an employee of Checkers nor do have stock in the company, but they've impressed me very much lately. I've been by there several times the past few months working on my car. I tell the guys/gals what I'm trying to do (a few of them recognize me now as the guy converting his car to electric) and ask what they recommend. The employees have all been very knowledgeable - they don't push me into buying something they have in stock - and they've told me on several occasions that I should go to ___ store instead. Excellent service. Okay, so back to the conversion. Checkers carries several types of gauges, including a style that is darn near exactly like the car's original! 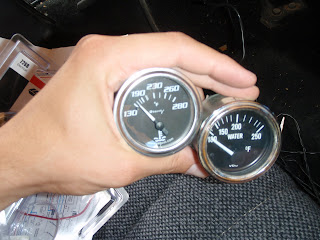 There are 2 types of temperature sensors you can get: electrical and mechanical. The electrical is similar to what the car already had. I could pick up a new gauge for $20, get a 2-wire sensor for $20 (so it doesn't ground to the 120V), and then find a way to attach/bolt it onto my motor. The only existing bolt holes on the motor are for mounting around the accessory shaft, and those are smaller than the typical sensor bolt. The mechanical style on the other hand is pretty cool. The gauge has an electrical connection for the instrument lamp but nothing else. There is a long thick tube coming out of the gauge connected to a sensor. The tube is filled with a gas, and when the sensor heats up the gas expands which moves the needle. It doesn't need electricity to operate, so I can watch the motor cool down with the car off. For installation I just need to thermal paste the sensor onto my motor. The biggest downside is if I do use thermal paste I will have to break off and re-glue the sensor whenever I pull the motor out (hopefully rarely). I bought the mechanical version.

The center dash has not only the temperature gauge but also the fuel gauge - another one that is no longer connected to anything. Checkers had a voltage gauge for the 12V system that looked pretty good. Ideally it would be a 120V gauge... Best case I can find an easy way to cut my main battery pack voltage by 1/10 and use this gauge as the overall fuel gauge, worst case it is a reader for my DC-DC converter. Either way it should work out fine. 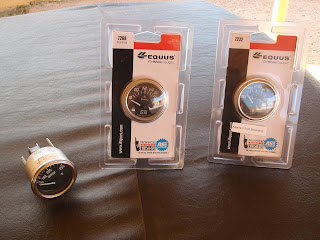 Before I installed the temperature gauge I (of course) had to test it. I was afraid that the mechanical gauge would have a large delay between when device heats up and when it shows on the gauge. I went over to my oven, turned on one of the burners, and held the sensor a few inches above the flame. The gauge actually responded very well to the temperature change. Even when I shut off the heat it went down reasonably well.

The motor itself has a built-in temperature sensor. The two wires that come out of the side of the motor are normally open, but when the motor heats up to a dangerous level the circuit closes. As I mentioned in my last post, "you can hook up a buzzer or a light or a plastic hand to slap you in the face" to get your attention. I decided to go with a bright red LED and a rather annoying buzzard. Why both? Well not everyone will see the light right away, so a sound warning is good. If there is a buzzard but no associated light then someone driving my car might not know what it is for. Also, some people may go "oh, I've only got a couple miles to go, the motor can make it" and easily ignore the light. Not this buzzard, it's so annoying you -will- pull over and shut the car off so you don't have to hear it anymore.

A quick drill into the wood instrument panel and I had a hole for my light. I'm putting the light on the "hot" side of the temperature gauge so it will be more intuitive as to what it's for. 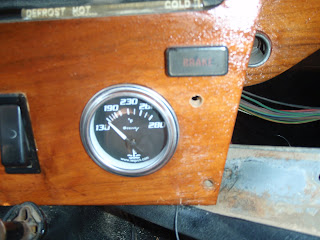 Since I'm using the mechanical temperature gauge instead of the electrical, I actually have extra wires available to connect my new warning system. Perfect! Wired up and it's done. 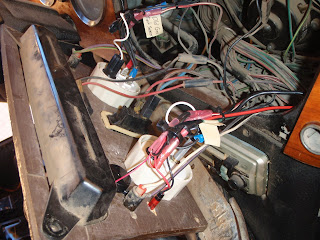 The sensor and overheat wires that will connect to the motor... 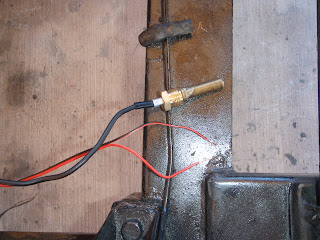 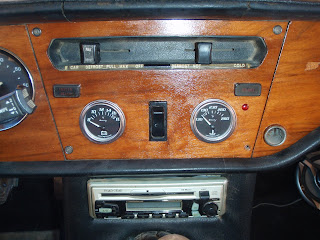 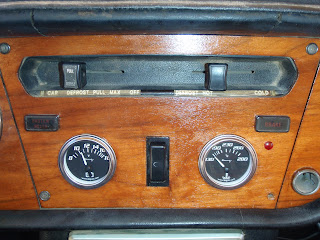 My voltage is showing lower than I'd like - when I test the voltage at the battery is reads a much healthier 12.5. I may find a different location for the voltage to read from, but it does work for now. The overheat light & buzzard work beautifully! I'm going to post a video next of the new gauges operating.

Oh, I also took care of a few other things while the dash was out. I rotated the headlight switch around. Originally it was top down off, toggle the switch down to turn it on. That seemed counterintuitive to me so I just flipped it around. Now you push the top of the button to turn on the lights. I got the CD/Radio working too! The previous owner installed a CD player, but it wasn't connected to any speakers (and for that matter I couldn't find any speakers in the car!). Luckily I had an extra one in the house and had to try it out. 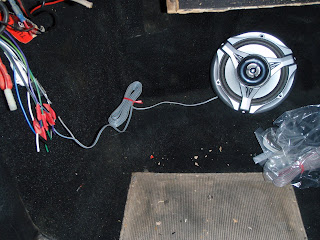 The wife is ready to take it for a spin! 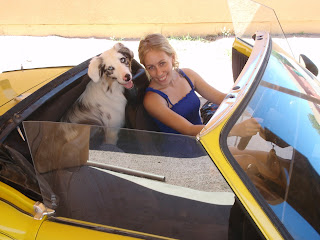 Now I just need to get that motor installed...
Posted by Clint at 7:32 PM

Music from the 70's is something to be avoided? EXCUSE ME?!?! Has someone forgotten about ABBA?!?!?

Thank you for the excellent example!