Well, I had my electric motor for over a month and had yet to run it! Curious to see if it worked (and just because I wanted to see it turn), I decided to test it out.

I was tempted to just leave the motor in its styrofoam packaging and connect up the wires, but since I've never messed with a motor of this size (and didn't know exactly how powerful it would react), I decided to build a proper test stand.

I scrounged around my scrap wood and found some nice pieces of 3/8" plywood, about a foot wide and several feet long. I would have preferred 1/2", but since I won't be putting more than 12V through the motor I figured the 3/8" would be sufficient. 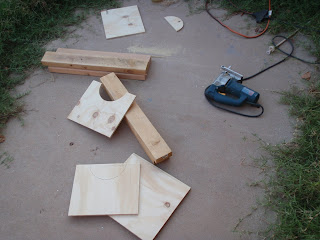 I cut 3 vertical support pieces, a front plate, and 2 side supports. 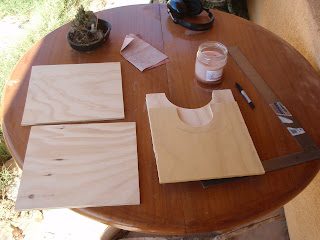 My motor is 6.7" in diameter - the support pieces have round openings 6.75" in diameter. The face plate also has an opening for the shaft to fit through. 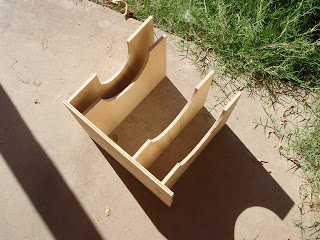 I planned on drilling mounting holes in the face plate so the motor wouldn't be able to rotate on the stand; unfortunately I didn't have any bolts that fit in the motor and I couldn't go to the hardware store. Oh well, it's only 12V right? The motor shouldn't torque too much. Right? 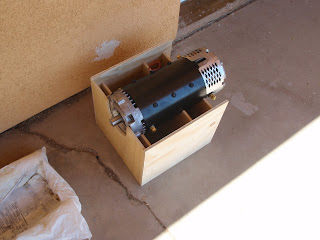 One of my friend's car batteries had just died (it was several years old - had a good long life), and when I heard he had to replace it I jumped at the chance of scrounging it up! (Thanks Chris!) I checked it with a multimeter - only 6V for a 12V battery - yeah, it was dead. Another friend had a battery charger he was letting me borrow. (Thanks Luke!) My idea was charge up the battery then immediately do the motor test. It wouldn't last long, but this was more of an exercise in watching it spin than how powerful it could spin.

I charged the battery for a couple hours then decided to give it a try. The battery read just over 12V for the test, but as I held the multimeter on the battery I could watch it slowly drain. Yeah, that thing was dead. 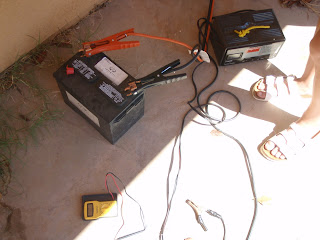 And then connected to the motor... 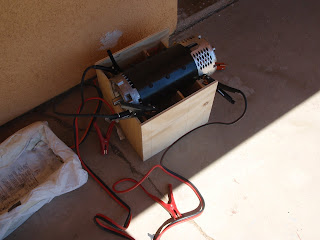 Success! I was a bit nervous what would happen, but the motor spun right up and purred like a drowsy kitten. Well, for about 15 seconds... My next post will include a video of the motor running, but it really didn't last long.

Oh, and I -finally- found some official drawings / performance pages on my motor. Google long enough and you can find anything!

I also found instructions online concerning WarP motors and how to bench test them. They read (and I quote), "Caution!!!! Sparks can ignite gases emitted from batteries! If a battery is used instead of a charger, the battery must be at least 20 feet away from the motor in a well ventilated area or preferably outside of the building! The cables MUST be connected and disconnected in the order shown!"
Connecting sequence:
1. Connect cable 1 between A2/S2 and cable 2 between S1/- Terminal.
2. Connect cable 3 to the + Terminal. (Connect to the battery before connecting to the motor!)
3. Connect cable 3 to A1.
Disconnecting sequence:
1. Disconnect cable 1 first. (This deactivates the motor.)
2. Disconnect cable 2 and then cable 3 from the power source.

I don't understand why the connecting/disconnecting sequence is so critical, but there are 8 exclamation marks on those instructions so I decided not to argue!

The two smaller wires from the motor are actually an overheat temperature sensor. The wires are normally open, but when the temperature exceeds 120 degrees C, the circuit closes. Apparently you can hook up a buzzer or a light or a plastic hand to slap you in the face when the circuit closes to let you know the motor is melting. At that point you immediately pull over. (Thank the guys at diyelectriccar.com for that info!) I've got some plans for the temperature sensor, but I'll post those updates later!
Posted by Clint at 3:19 PM