I finally got around to wiring up the DC-DC converter. It's actually for 120V to 12V because I originally planned to have a 120V nominal Lead battery pack. I'm now only at 96V nominal with the Lithium cells, but I think there is enough overlap in the operating ranges of the batteries and the converter so I should be okay.

Two sets of wires from the converter. Red / black for input. Green / blue for output. 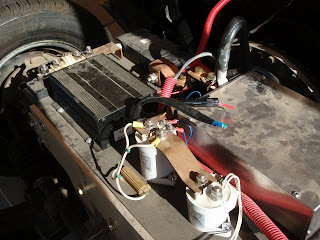 I wired the input to include my fuse and circuit breaker on the positive side so it will have a bit more protection. On the negative side, it is wired after the key contactor; so the 12V battery will not start charging until the ignition is turned on. I was debating on whether or not to have it connected at all times or just when the car is running. I finally convinced myself that I didn't want 96V constantly running through any of my circuitry (especially when I'm not there) if it wasn't necessary. (The length of the wire from the converter not being long enough to bypass both contactors may have influenced the decision.) 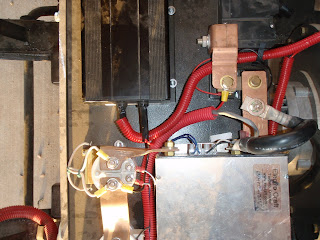 Here's a shot of the DC-DC output going to the primary positive and negative connections on the car. 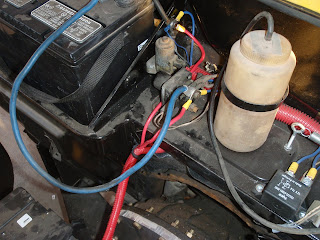 Last I heard my batteries had arrived at port and were going through customs.
Posted by Clint at 9:35 PM